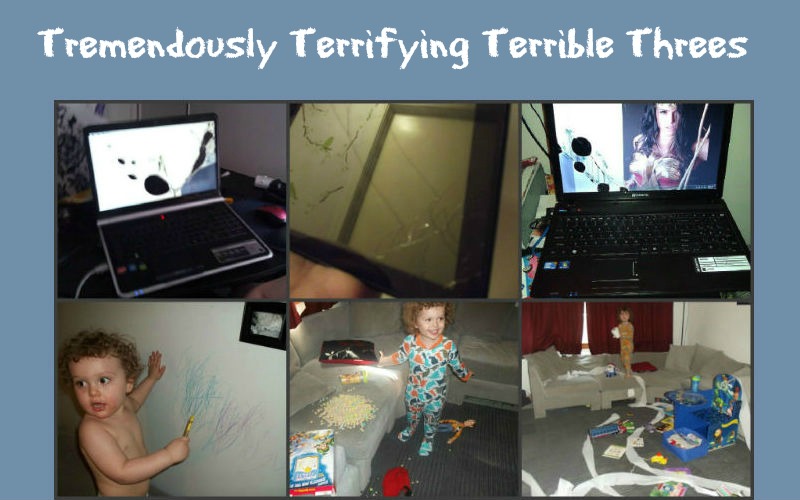 So Forrest Gump said “Life is like a box of chocolates, you never know what you’re going to get” and while that is true I would liken that saying more towards parenthood, you have no idea what kind of kid you’re going to pop out.

I think I got the coconut one in the box, you know the one most people try to avoid.  Thankfully I like coconut.

Dean is now 3 and if there is a such thing as the “Terrible Twos” then I must be experiencing the “Tremendously Terrifying Terrible Threes” where by 10 pm every night I just want to lock myself in the bathroom and cry.

I know to an extent all toddlers are bad, it is just their age.  I also know that every toddler is different and all fall somewhere between “Mostly Behaved Angels” to “Please God Let There Be Toddler Military School”.  Dean spends most of his days on the further end of that spectrum.

I know that it will get better (it has to right?) I know he will grow out of this and be manageable again.  I know it is a phase and will pass.  At least these are the things I tell myself while marveling at the new gray hairs I have gotten that day.

Speaking of gray hairs I should have known I was in for a rough ride when one day while Dean was around 6-8 months old he gave me a hell of a day I don’t even remember what he did but all I know was it was the worst day I had had since he was born and the next day in the mirror I had a gray hair, an entire long gray hair.  Like in the movies I had had such a bad day my hair turned gray.

Dean has always been a rather “rambunctious” (to put it nicely) kid.  I sneak in the room at night when he is sleeping to love on him because I can’t catch him during the day!  He is forever getting in trouble, the other day at my grandparent’s house he threw the TV remote at the sliding glass door then pulled their blinds down on top of his head -_-

In this last year he has broken two laptop screens and just yesterday he threw and cracked the screen of the Kindle Fire (which he dubbed “Towsky”).  This was after he punched me in the nose and gave me a roundhouse kick to the kidney.  I swear this kid is going to kill me!!

I should have known he was going to be a handful when I went in for my 12 week check up and he was waving his hand like a mad man on the sonogram.

I should have known I was in for it when I got PUPPS while pregnant (a skin rash that covered my whole body making me miserable!!)

I should have known I was in for it when his little butt was so active in my tummy he could knock boxes off my stomach and got tangled up in his umbilical cord.

I should have known I was in for it when I delivered him and he was almost 9 pounds!

I should have known I was in for it when he didn’t have time for crawling and went straight to walking, then to climbing.

I should have known I was in for it when he started doing bad things and blaming it on “Woody” (his doll from Toy Story).

And from then on it has been a battle in my house every day.

But I love him and he is mine, he is bad and he is rough and people probably feel sorry for me when they see him melt down in a store, but he is mine.

People probably shake their heads in disgust as he bolts from my hand and screams and hits when I catch up with him, but he is mine.

He is my bundle of trouble.  I am his Mom and I know him and I know that even after the worst day ever he will still snuggle down next to me to read while putting his little hand under my chin, something he has down since birth.

I know that after coating the house in powder listening to him say “I love you so much, baby hugs!” will melt away the bad things that happened that day.

I know that coming home after getting out of the house for break and seeing him run to me for a hug and say “Mama, I sooo happy!” makes up for whatever it was he did to drive me crazy that day.

Yes he can be a handful, but he is my handful and I wouldn’t trade my coconut for all the sweetest caramels in the world.

You can watch one of my videos I made for him here! ——–> https://www.youtube.com/watch?v=zV8zqJBcuOk&feature=youtu.be